Conversational UIs and bots for news and information — Part 1

The last couple of years have seen some great projects exploring different uses of technology and the city. Hello Lamp Post, which took place in Bristol during the summer of 2013, was particularly exciting. In case you haven’t seen it, here’s the idea: people send a text message to an object around the city such as a lamppost or postbox and then become part of a conversation with other people who have done the same. The main point here is that the city’s inanimate infrastructure becomes the conduit to layers of information, stories and other people without those objects actually being connected to the network.

We were keen to explore this idea in the context of news and information. Imagine if you could build up detailed maps and information about demographics, crime, housing and schools (all from public sources) as well as timely information such as what’s on and what’s happened and then people could interact with this wealth of information about specific locations through the city’s infrastructure in playful and engaging ways. Add to this elements such as sensors, e.g. Smart Citizen project with FutureEverything, and there are some very rich and exciting things to explore — air composition (CO and NO2), temperature, light intensity, sound levels, and humidity. That was the pitch. The Manchester Evening News were also keen on the idea — in particular, how it could be used to help a news organisation to become part of the fabric of the city.

There’s some existing approaches to providing these kind of services and information.

If we give the illusion of a connected object using existing city infrastructure and build a conversational user interface which anyone with a phone could engage with, we could in theory avoid the problems of the traditional approaches.

These objects are rooted in a particular location, so we can provide neighbourhood-specific content without any geolocation wrangling. Everybody has SMS, so there’s no friction, such as go to the App store and download this app — before a user can even begin. The framing premise is also convincing: these object sit in the city and are witnesses to the changing face of the city, its history and the activities taking place there. In the end we came up with a range of possible activities. 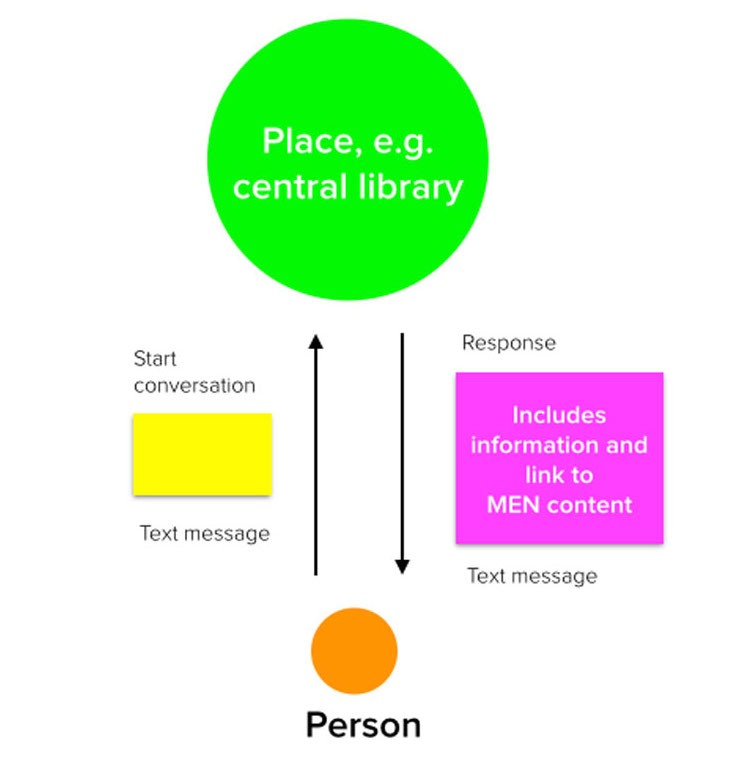 So we decided to build some prototypes to explore:

I wrote this post for the Leeds Creative Labs — Hepworth Edition where it was published. I‘m also posting it here for archiving.

Here‘s a picture of our excellent team: Steve Manthorp, Louise Atkinson, Joanne Armitage (and me taking the picture). 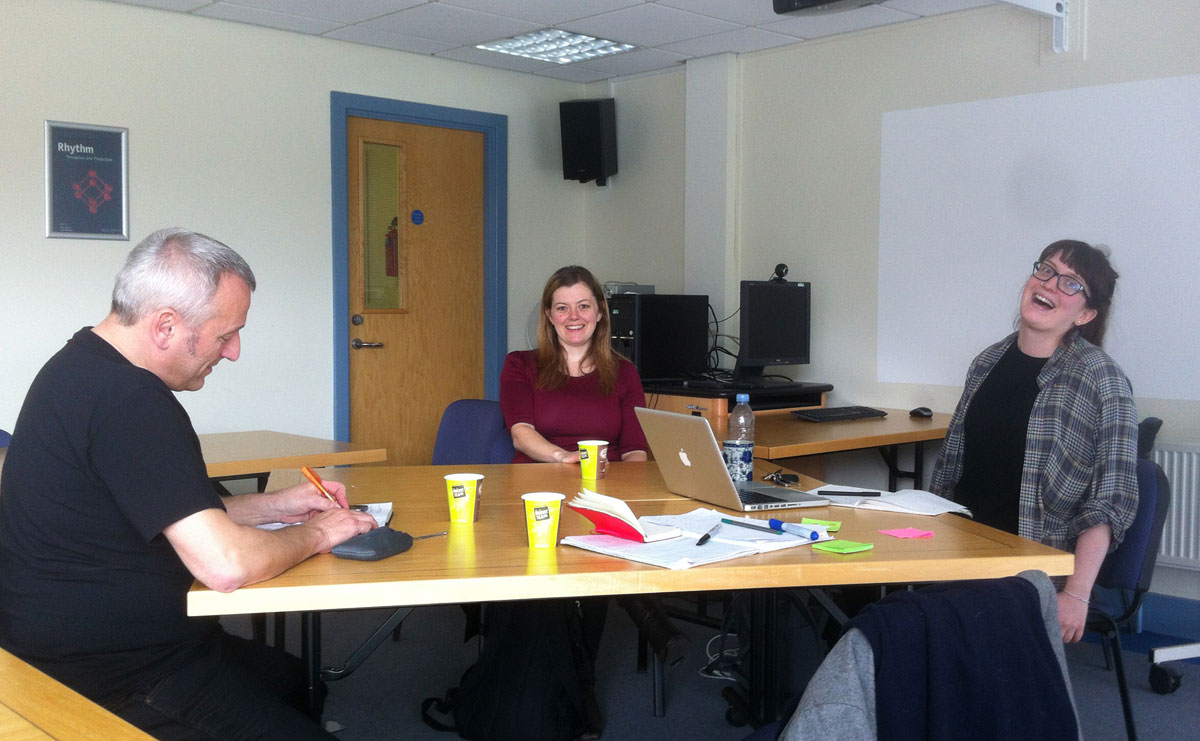 We roved far and wide in previous meetings, leapfrogging from one idea to the next, careful not to kill anything with even the whiff of goodness. But with the deadline just over a month away, the next two meetings at the School of Music in Leeds were time to focus. As it turned out, four strands emerged quite naturally, each around a certain aspect of the object, its place in the world and its relationship to the gallery and the audience. 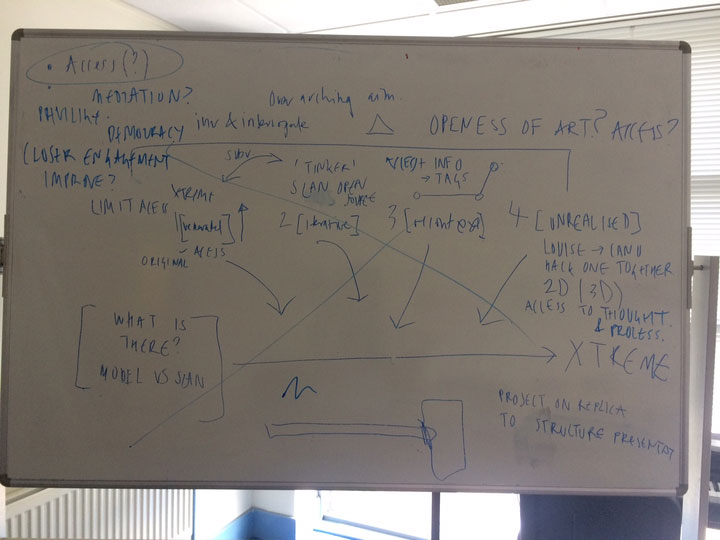 These ideas started to hang together quite nicely. In each case we picked up on stuff which is already happening and tried to create a framework which would encourage that behaviour and help people present it back to the world. The idea of “open source” kept cropping up as a model for collaboration and co-creating. Perhaps an even better one is “view source”. Being able to view source on a HTML page is a vital part of seeing how a webpage is constructed, copy and pasting it and using it yourself. This approach seem to be at the heart of each of our explorations – what would the ability to “view source” look like for sculpture, what behaviours would it encourage, would they be worthwhile? Come along to the Hepworth on 4th June to find out. 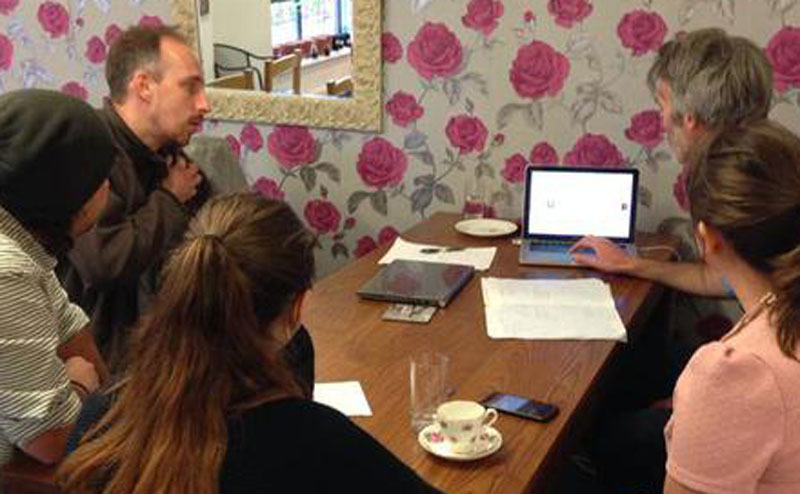 We tried something different this time. Inspired by a journalist called Noah Veltman, we put on a HacksHackers Manchester “learning lunch”. We hope it will be a way for people to learn about and discuss important topics for journalism in the 21st century.

The first one was on the subject of web APIs. An API (Application Programming Interface) is a way of getting information out of a system without having to know all the details about how the system works. Everything from Twitter to Yelp to Google Spreadsheets has an API and we looked at:

We booked some tables at Ziferblat on Edge Street in the Northern Quarter, a venue which charges 5p a minute per person. It includes superfast Wi-Fi, unlimited free coffee, tea, soft drinks, waters, cakes, biscuits, toast, savoury snacks and cereals. It was a good session.

Here’s the slides from the talk.

Here’s a list of web APIs that don’t need authentication making them easier to mess around with.

Hack the election at Hacks/Hackers MCR 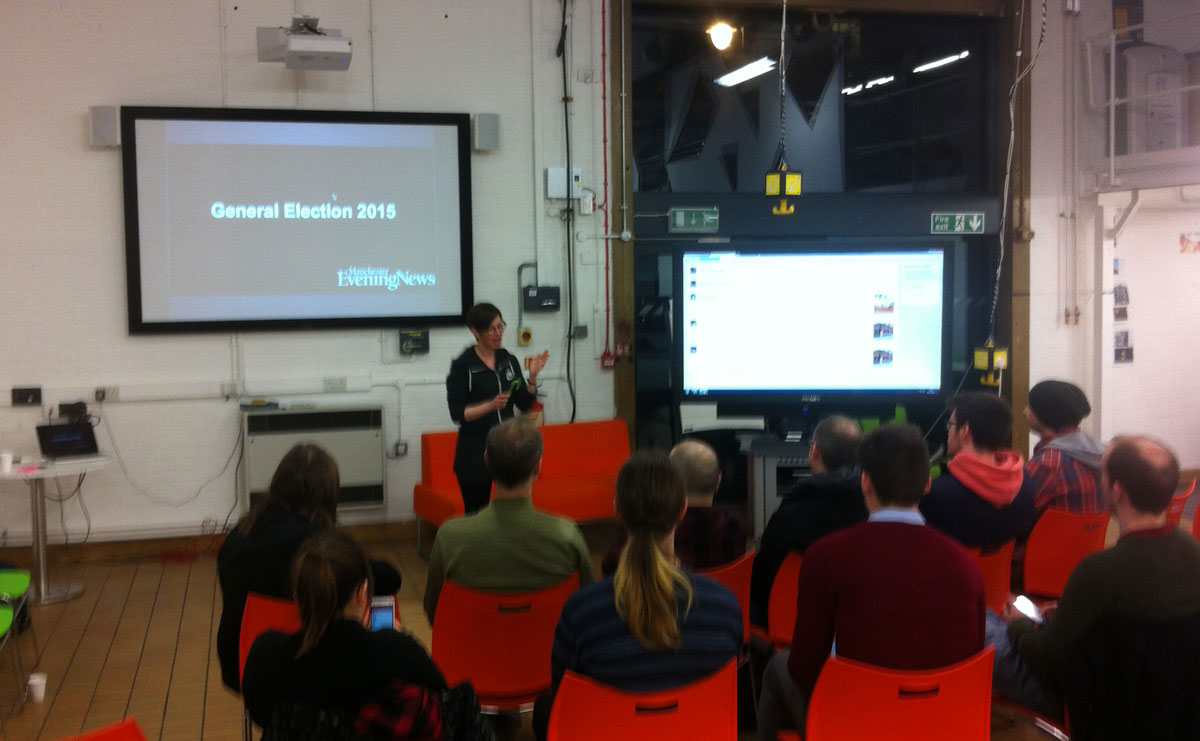 The fourth Hacks/Hackers Manchester was about the general election. How can we make the upcoming general election more interesting to young people and encourage them to use their vote? Can we use games, apps and other tools to engage them in the democratic process or just to make it more fun?

Here are my notes from the event.

First up was Beth Ashton, Social Media Editor at MEN, who outlined how for the newsroom had come since the last election. She also talked about some of the planned coverage including the Manchester Manifesto, an online poll on local and national issues which had over 5,000 respondents.

Next up was Francis Irving, CEO Scraperwiki. He’s a programmer and activist who has built what he referred to as “disruptive, civic tools” such as YourNextMP and ElectionLeaflets.org.

He went through various points from Agitprop Àgogo, a set of posts by Tony Bowden, mySociety‘s “international agitator” outlining mistakes and opportunities in civic technology. It’s a great site and well worth exploring in depth. Here’s a few that stood out:

To end we had Dan Hett, a games developer and livecoder who works at the BBC. He gave an excellent talk on his approach to work:

A great evening with much to mull over. Thanks to all the speakers.

I did a quick introduction to digital maps at Hacks/Hackers Manchester in November. Here’s the instructions and links for reference.

A quick and simple process for getting the latitude and longitude for a column of addresses.

Geojson is a good format for the data. It is flexible and allows you to add your own data to the structure. It’s quite easy to read, but it can be inefficient with large data sets and polygons (consider Topojson if project can work with modern browsers <IE8)